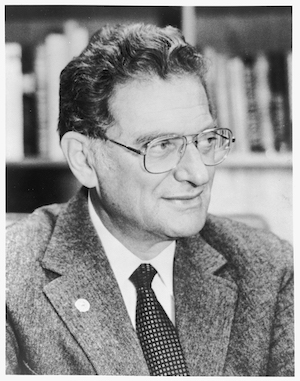 Daniel Thursz (1929-2000) was born in Morocco and moved to the U.S. with his family in 1941. While avoiding the terror of Europe, his family was directly affected by the nightmare of the McCarthy era. In the 1950s, he received a bachelor’s degree in political science from Queens College in New York and master’s and doctorate degrees in social work, both from Catholic University. He served in the Army during the Korean War. He was a program director at the DC Jewish Community Center and worked at B’nai B’rith until the early 1960s. Prior to becoming Dean of the University of Maryland School of Social Work, a position he held from 1966-1976, he was Associate Director of VISTA. From 1976-1986, Dr. Thursz was Executive Vice President of B’nai B’rith International. In the 1980s and 1990s he was on various councils on aging, among them the White House Conference on Aging’s Policy Committee, and served as Chair of the Leadership Council on Aging Organizations. From 1988 to 1995 he held leadership positions in the National Council on Aging and was named President Emeritus. He also served as Secretariat of Generations United, a coalition of over 80 national organizations concerned with intergenerational work. Dan Thursz was an innovator in both the theory and practice of communal social work. This is reflected in his many publications, which include Empowering Older People: An International Approach; Meeting Human Needs; Reaching People: The Structure of Neighborhood Services; Reaching the Aged; The Changing Meanings of ‘Independence’ in an Aging U.S.; and Social Aspects of Poverty. He was a fervent and articulate advocate for the disadvantaged and the poor. He demonstrated a lifelong commitment to improving, intensifying, and deepening the interaction between individuals and the democratic community. This was also reflected in his role as a leader of the Peace Now movement in Israel. At the time of his death, he was President Emeritus of the National Council on Aging, President of the International Federation on Aging, and Director of the Center on Global Aging of Catholic University.

From the Darrell D. Friedman Institute for Professional Development at the Weinberg Center